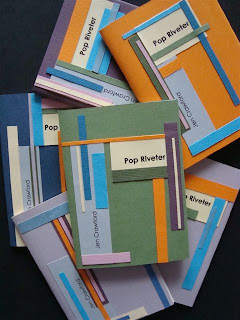 Pania Press is very pleased to announce the publication of the poetry chapbook Pop Riveter by Jen Crawford.

When Jack first published this sequence (in a slightly different form) in Poetry NZ 38, this is what he had to say about Jen and her work:

Jen Crawford was born in Patea, Taranaki in 1975 and spent her early years in New Zealand and the Philippines. In 1994 she moved to Australia to study and later completed a PhD in Creative Arts through the University of Wollongong, for which she wrote on images of the child in New Zealand literature.

Her first short collection of poetry, ‘tigerbutter’, appeared in the collaboration Fathoms (scarp productions, 1996) alongside work by Australian writers Lucy Alexander and Porsche Herbert-Funk. In 2000 Five Islands Press published her narrative poetry sequence Admissions, which was highly commended in the Anne Elder award and shortlisted for the Dame Mary Gilmore award. Jennifer Harrison said of it in Australian Book Review: “The structure is brilliant.... the poems disintegrate into blocks of raw, pressured thought; time and identity distort.” Her most recent poetry book, Bad Appendix (Titus Books, 2008), has been described in similar terms as “a series of lightning strikes – strobe-like and disconcerting, drawing on the deepest aquifers of human need.”


These poems are my attempt to acquire a poetics apt in shape and diction to a particular industrial environment. I wanted to respond to certain factory conditions: sensory saturation, procedural monotony, proprietal language, the deceptive temporalities created by the movement loops of manual production and the alternately overlapped and repelling identity orientations created by working collectively as part of a physical function. The poems also record my pleasure and frustration both in this setting and in the people I shared it with.

“Pop Riveter” might perhaps be better seen as a series of pageworks or concrete poems than an attempt at conventional lyricism. One interesting aspect of the poems is the way in which this attempt to evoke directly and literally the pressures of an industrial environment has resulted in work which looks (superficially) very similar to L=A=N=G=U=A=G=E poetry. It’s as if theory and praxis have brought her, by very different paths, to precisely the same destination.

If you give them time I’m sure her poems will end up speaking to you, too.

Since the above was written, Jen has accepted a position as an Assistant Professor in Creative Writing at Nanyang Technological University in Singapore. She's also published another chapbook: Napoleon Swings (Auckland: Soapbox Press, 2009). 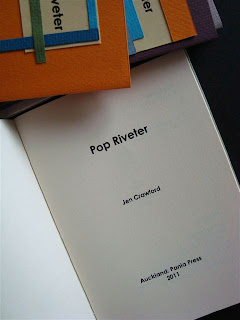 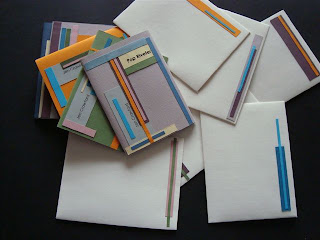 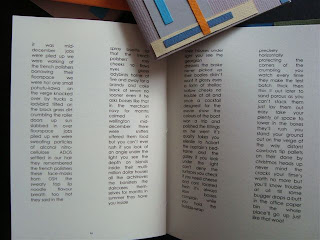 To place an order for a copy of Pop Riveter, please contact Bronwyn at the email address in the sidebar.